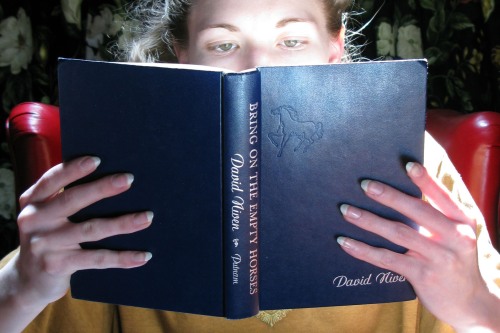 Bring on the Empty Horses

David Niven‘s 336 page collection of written sketches is a veritable goldmine of Hollywood tidbits:  A classic film fan’s dream text. It’s one of those books which takes over your life and forces you to read it cover to cover asap. Every task falls by the wayside in its path…David Niven’s tales come first.

The writing itself is the best out of any star book I’ve ever read.  The gorgeous language flows off the page while jokes are effortlessly and hilariously woven throughout. If you’re in need of a sophisticated, fun read to curl up with, look no further my friends – it’s here.

Among the scores of fascinating stories related in this book are vivid descriptions of Hollywood’s most famous (but, now, sadly extinct) restaurants and cafés. This book was a huge source of inspiration for me when I was working on my Trip to Hollywood project. I started looking up to see if I could find photos of these amazing places, and along the way I found the logos, which for a graphic designer, is even more thrilling than the photos. I could in no way do justice to Mr. Niven’s writings in a summary, so here are some of the restaurant description excerpts: 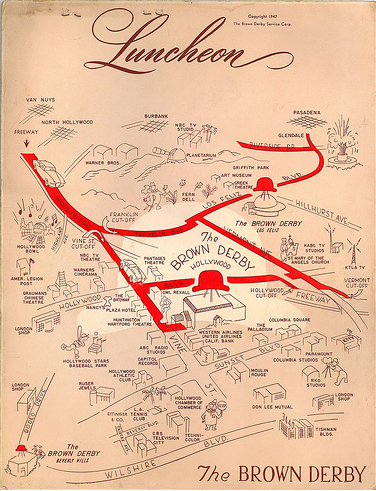 Shortly after this interlude Flynn took me to lunch with Barrymore at the Brown Derby in Beverly Hills. This restaurant was designed so that everyone could see everyone else; the tables were set at a series of semicircular brown leather banquettes, the backs of which fitted uncomfortably into one’s lumbar region. The waitresses, all would-be actresses, wore very short bell-shaped and highly starched skirts and spent much time dropping and provocatively retrieving forks and spoons before the tables of producers and directors. Barrymore caused quite a stir when he entered, and he boomingly table-hopped his way to our corner. 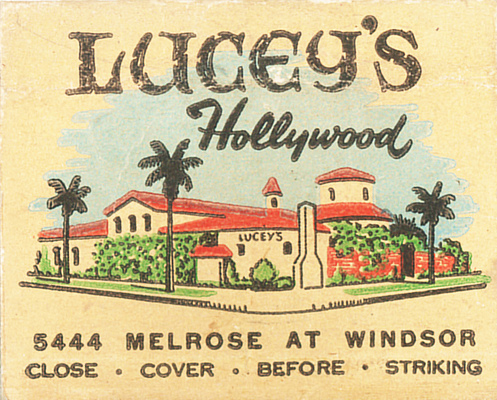 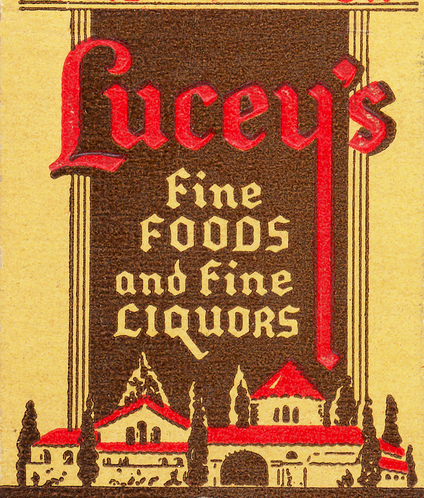 “Lucey’s,” he said to his chauffeur.

When he entered the small grottolike restaurant opposite Paramount Studios, it took a few seconds for his eyes to become accustomed to the gloom.

The dim lighting was not accidental. Lucey’s was the favorite rendezvous of the starlets and young actors from the nearby studios, the Italian food was inexpensive, the steaks were good, and the kidneys grilled in their own natural cradle of fat were delicious…

…The restaurant was filling up, and the discreet little alcoves around the main floor became nests of opportunity; at the exposed tables in the center, out-of-towners sat, taking their time over long drinks and trying to spot celebrities in the smoke-filled gloom. 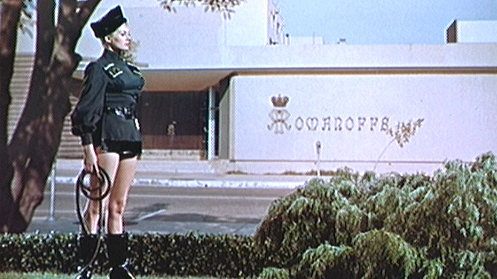 Restaurateur Mike prospered during World War II, and by 1945 he was firmly established at the owner-manager of the highly lucrative Romanoff’s in Beverly Hills. The imperial R was emblazoned on the front door. When he branched out into an even larger and more elaborate establishment, his loyal staff and clients and the imperial R made the move with him.

Other attractions in Bring on the Empty Horses include the continuing adventures of Hedda and Louella (Chapter 4). David Niven reveals how much power these two lunatics actually had, and what they were willing to do to maintain it. I was amazed when I found out how many stars lived in fear of Hedda Hopper and Louella Parsons. I have never been able to understand how either of them managed to become such famous, important figures, but according to our friend DN, they were both utterly ruthless, willing to throw anyone and everyone under the bus for their own personal gain. They were the heads of spy rings even 007 would have envied, and were in possession of every scrap of gossip as soon as it happened. Thank heaven they are safely gone, because a world with them in it sounds like a nightmare.

And last, but most certainly not least, we have Missie. DN devotes two whole chapters to the strange life of Missie, a famous Hollywood star who remains nameless because of the shocking nature of the stories DN shares about her. She is described as follows:

Her face, which was snub-nosed and pretty, was saved from being unremarkable by a pair of huge gray eyes. It was topped by a cloud of golden hair and had the great good fortune to be strategically placed above the most beautiful body in Hollywood.

She has cat-like eyes and was given her first screen appearance in a solo number in a Busby Berkeley musical. She has recently given birth to her daughter, Sharon when we first meet her.

I was racking my brains for a candidate and finally ended up guessing Lana Turner (even though her looks were far from “unremarkable”).  But, then I did some research and found that the general consensus seems to be that Missie is Vivien Leigh. All the red herrings were DN’s effort to confuse everyone as to her true identity.

This is but a tiny sampling of the wealth of classic film goodness awaiting you in Bring on the Empty Horses. You have no excuse for not obtaining your own copy, either, because Amazon has an extensive listing of used copies ranging in price from $.90 to $92. A price to fit everyone’s pocketbook. I obtained my lovely hardcover copy for a mere $5 in an antique shop. So, what are you waiting for? Get reading!

I’m so excited to tell you about my latest art project!  Our assignment was to create a poster and brochure for a trip.  We had to design and put together a box to hold the brochures that attached to the poster, creating a free standing display.  We could pick any place and any time period for our trip, so (this will be a big surprise to everyone I’m sure!) I chose to take a trip back in time to 1940 Hollywood.  I picked 1940 specifically because I wanted to have my vacationers be able to see some of the charmed 1939 films in Graumans.  I looked up when these films were playing in theaters, and 1940 was when most of them were actually released.

So, here’s the finished piece:

When all the brochures are taken…

there is a small spot behind the brochures with contact information for the travel agency (fictitious in this case).

The brochure.  These are layout images, so you kind of have to use your imagination as to how they fold up.  I wanted you to be able to read the copy, so I uploaded them this way.

It was such a fun project to design.  I got to take my file for the poster to a professional printer and see my project come to life.  It was truly a thrilling experience (in a geeky graphic design sort of way).  :)

I’d be so grateful for any feedback you’d like to offer.  I am well prepared to take constructive criticism.  My feathers don’t ruffle easily, so don’t be afraid of offending me.