I can’t believe my first trip to the Turner Classic Movie Film Festival was already a month ago. It all flew by and I spend a great portion of my days now wishing I could go back and relive the experience. Where’s Rod Taylor when you need him? 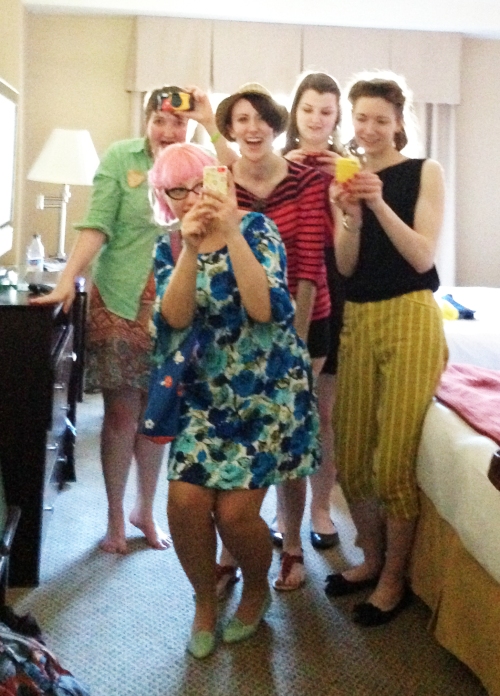 The main purpose of this trip was meeting my four Non-fleshie pals: Kate, Millie, Nicola and Sarah. We’ve known each other for 5 years online, corresponding over our classic film loves (Dana Andrews, Hedy Lamarr, Jeffrey Lynn, Julie Christie, DFJ, Dirk Bogarde, Natalie Wood) and agreeing to disagree over some stars (*cough*Tyrone Power…Jimmy Stewart*cough*). We always said that for our 5 year anniversary, a grand meetup simply MUST take place. We had no idea how we could make it work, but the notion persisted. Honestly, I never thought we would actually pull it off, but by golly, we did!

I rose before the sun and arrived bright and early for my flight to LA. I chose a direct flight and it turned out to be one of many smart newbie decisions I made this trip. Landed in LA, I texted the ladies and put the pedal to the metal for our meeting place. The inscrutable Millie sat perched on the edge of a plastic chair watching the door for me and we flew at each other screaming hellos as soon as I came through the door. After marveling over the fact that neither of us turned out to be creepy old men pulling an enormous con on unsuspecting girls, we sat ourselves on the plastic chairs of LAX and awaited the arrival of Kate, Nicola and Sarah. Kate and Nicola arrived in short order and more screaming ensued, but Sarah’s flight did not land for several hours, so we occupied ourselves people watching, taking selfies and chatting like we’ve been fleshies all this time. When we finally retrieved Sarah from the dark hole in which she landed, we stuffed ourselves (all 5 of us, mind you) into a little Uber sedan for the ride to our hotel. (Lesson learned: request an Uber SUV when transporting 5 girls. And demand the use of the air conditioner.)

If we didn’t feel close before, we certainly bonded over that Uber ride. Poor Millie spent the trip with my bony elbow in her ribs – and still liked me afterwards! Let me just interject here that these 4 lasses could not be kinder, sweeter or more hilarious. I am so thankful to have them in my life and so thankful to have had this opportunity to spend time with them.

Nicola marveling over Snow White in her cafe. Photo by Kate.

Since our last meals were eaten (what felt like) days before, our first official act in LA was a late lunch. The Snow White Cafe on Hollywood Blvd fit the bill nicely and offered a Disney theme to the delight of Kate and Nicola. The gals set about getting the lay of the land with a little sightseeing and I headed back to our hotel to meet Raquelle for a secret mission. She is even nicer and kinder in person than she appears online. And she is beautiful! Even when she doesn’t feel well! I so appreciate her taking me under her wing for the next part of our evening.

Raquelle and I walked to Sadie Kitchen and Lounge for the TCM Tweet Up. I knew nothing of what to expect for this. My invite came via the lovely Nora (official TCM social media coordinator) and the details were sparse, except promising a chance to meet my famous Twitter chums. Sadie’s has a real speakeasy feel with the password door and all. We spent our time there in The Parlor. After Raquelle and I were royally welcomed by Nora, I had the great opportunity to begin meeting and chatting with those aforementioned famous Twitter folks. Laura, Trevor, Paula Guthat, Kellee, Aurora, Jessica, Lindsay, Marya, Anne Marie, Christy and Daniel all among them.

Jessica and I in front of the speakeasy door at the TCM Tweet-Up, snapped by Raquelle.

As I was highly engrossed in a conversation with Raquelle and Jessica about our dresses, who walks in but Illeana Douglas! As if her miraculous and unannounced appearance was the most normal thing in the world. I’m sure my jaw dropped. She moved around the room visiting and snapping selfies with the fans. A very classy dame, indeed.

My jaw dropped for my first celebrity sighting, I admit. But I did you proud for my second. Engaged in a chat with Marya and Daniel, I felt someone walk up and stand beside me. I glanced over assuming it was Raquelle. Not quite – the one and only Ben Mankiewicz stood to my left munching a grilled cheese sandwich, nodding along to our conversation. He and I talked for a bit, mostly about The Narrow Margin and his write up about it in the TCM Now Playing guide. No embarrassing novice moments in sight, due mostly to the fact that he is a joy to talk with and quite a laid back person.

Must admit, I’ve been the ultimate Robert Osborne fan from the beginning and always will be in his camp. When Ben came to TCM as a host years ago, I held my ardor. Bobby O. is the only host for me and watching Ben introduce my favorite films (one very irreverent intro to Sinbad the Sailor is burned on my memory…) pained me. His introductions and knowledge improved over the years and my respect for him grew in tiny increments, but meeting him in person truly changed my opinion of him for the better. He’s just a regular guy – remarkably kind, always willing to discuss classic movies and his love for them and he does honestly appreciate these films as much as we do. A true gentleman if there ever was one.

The second part of the evening sped by with a lightning fast round of quiz trivia hosted by Paula Guthat. Then, everyone broke into small groups for classic film chats. One hosted by Laura, one by Trevor and one with Tiffany Vazquez and Peter Tulba, two of the TCM Fan Programmers.

Peter in mid-laugh (sorry, Peter, you moved!) and Laura’s table in the back with Jessica, Raquelle and Aurora chatting.

I chose to sit with Tiffany and Peter and talking with them was a blast. Two young people with a genuine love for classic films brought together in this remarkable place, sharing their expertise with me…I was in heaven! Both are incredibly knowledgeable and well-viewed (is that a term?). Tiffany most kindly indulged my compliments on her wardrobe and Peter cracked us up multiple times. I’m thrilled to have met them both. I spent the next days waving to each of them as we whizzed past each other on the way to screenings.

Jessica’s tweets on the go are pure genius. 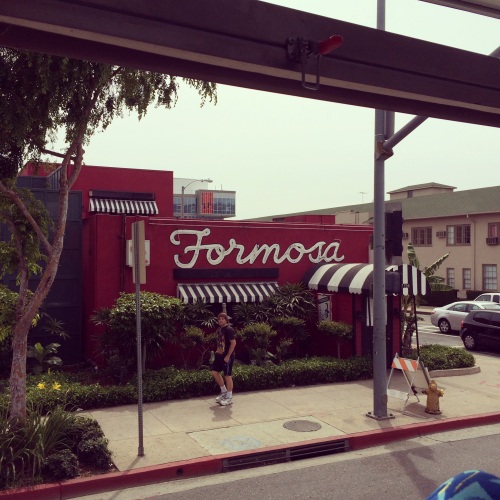 After Sadie’s, a few of us headed over to The Formosa for the Warner Archive tweet-up. Laura graciously offered to drive Raquelle, Lindsay, Jessica and I.

Matt Patterson and I engaged in conversation. Photo by Raquelle. (Thanks so much for this, Raquelle!)

Raquelle introduced me to Matt, the man behind the Warner Archive twitter feed and host of the podcast. And at the Formosa, I got to meet Kendall, aka KC. Contrary to popular belief among those in my *real life*, my famous love for an early bedtime began to catch up with me and happily, my cohorts felt the same. We called it a night around 12 (yeah, not actually early). A very full first day!

As you have probably already heard from the triumphant fanfare around the interwebs, TCM’s beloved host Robert Osborne is returning to his hosting duties this Thursday (December 1). Bobby O (as I call him) has been on vacation these past few months to the chagrin and dismay of many a classic film fan. His short absence only served to prove how much we truly need him because though some of the hosts were superb (and others need to be quickly forgotten…) no one even came close to replicating the charm, charisma, sincerity and sheer brilliance of Robert Osborne.

I know the universal love for Bobby O is hard to understand for people who are deprived of TCM. Let me try to explain. You see, every night Robert Osborne introduces the movies starting at 8pm. The introductions are quite short, considering the impact they have on viewers – usually between 5-7 minutes. But in those short moments, Bobby O shares trivia, stories, history and tidbits about the movie about to be shown. It’s like having a window into the time the movie was made, just to hear him talk. He’ll explain what else was happening at the time the film was made, who else was considered for the parts, why the cast was picked and who was in love with who at the time. He’ll point out scenes not to be missed or bit part appearances of yet-to-be stars. And he shares all this with a genuine warmth of feeling and care not only for the films but for you as a viewer. Robert Osborne is your amazingly knowledgeable friend who loves talking about movies and dropping film facts for you to enjoy.

I owe all my initial knowledge of 1939 as a landmark film production year to him and his introductions of the TCM Spotlight on 1939 some years ago. Even now, I can never watch Gone With the Wind, The Women, The Wizard of Oz, Stagecoach, Gunga Din or Ninotchka without thinking of him and remembering his comments on the films at the time.

My other favorite Bobby O memories are those little spots TCM used to play where he read viewer questions and answered them. I assume as the channel grew, it became too difficult to continue making those, but I was smitten with them. It was a little moment where the great Robert Osborne interacted with us as viewers and took the time to discuss what interested us.

His appeal for me is his unshakable devotion to classic films. When he stands in front of the camera and introduces a movie, you know he really cares about what he is saying. He gets it that these movies are incredibly special and need to be treated with respect. Plus, it’s pretty obvious he is as fervent a classic film fan as any of us. I just adore him and am so happy he is returning to his rightful place at the head of TCM. Welcome back, Bobby!

To join in this wonderful Welcome Back Bob party, check out the fabulous Tumblr started by @willmckinley and @misscarley. Many thanks to them for organizing our Bobby O adoration!

Ha! That title sounds like a crazy 60’s movie. Actually though, it refers to a real product that is now on preorder at TCM’s website.

He will be available on July 1, 2009 for only $16.99 of your hard earned cash.  He is a limited edition item, so take your chance while supplies last!

Okay, so it is rather comical.  You can’t help but chuckle the first time you see it.  It isn’t even a good likeness of him, but there is something endearing about a little 7 inch version of Bobby Osborne for your very own.  The stand even has a drawer in the front for all your precious TCM keepsakes.

I like him.  He may just end up on my desk sometime soon. :)