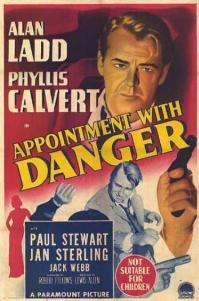 At first flicker, Appointment with Danger looks like a boilerplate low-budget Noir thriller from the 50s. Enjoyable and mildly exciting, but nothing to write a blog post about. However, after you survive the credits adorned with the postal seal and a short propaganda piece touting the Postal Inspectors as saviors of the world, you realize this is no ordinary B-picture. You’re dropped in a cheap hotel room where a fiendish crime is taking place, illuminated only with the intervals of a flashing sign. Cue the fadeout and our two crooks from the hotel room are making a getaway aided by a fast roadster and torrents of rain. But who are these crooks? You may well ask: 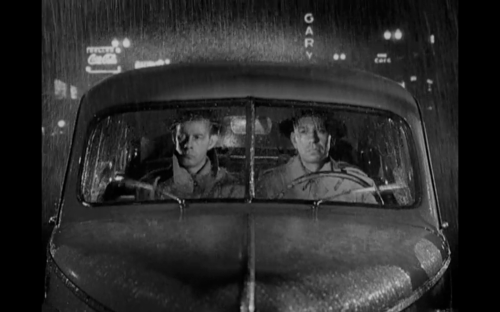 That’s right – Henry Morgan and Jack Webb, aka Gannon and Friday of Dragnet fame. As it turns out, the dynamic duo of 50s crime fighting boast a secret past they never divulged in their fervent search for “the facts” later in life. As it happens, the two of them see quite a bit of action on the wrong side of the law in Gary, Indiana. 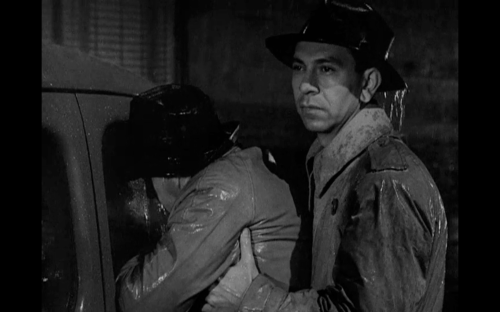 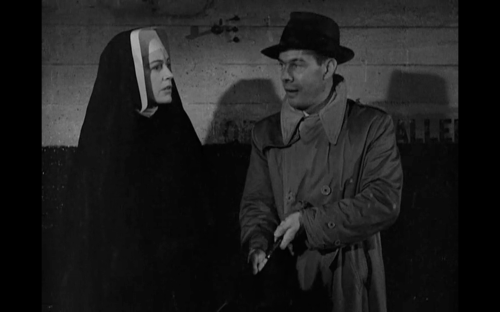 En route to dispose of their dastardly hotel deed, George (Harry Morgan) stops to aid a nun-in-distress with her obstreperous umbrella while Joe (Jack Webb) attempts to hide from the nun’s percipient gaze. But alas, Morgan and Webb just weren’t cut out for the thug-life. Their victim in the hotel room turns out to be a postal inspector (which means ALAN LADD is coming to get them) and worse still, the Umbrella Nun remembers them both (despite Webb’s valiant efforts to melt into the shadows). As Morgan and Webb discover later, the habited lady in distress is no ordinary nun. 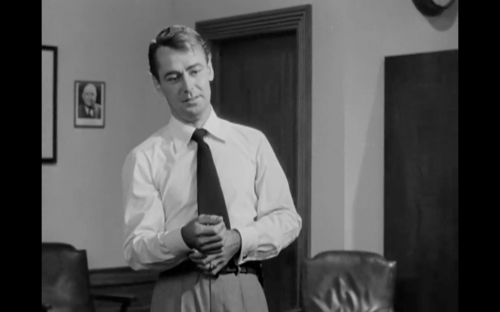 The hero of Film Noir himself, Mr. Alan Ladd (do be sure to note his fabulous hair – this is the kind of hair that falls down over his eye at strategic moments to melt a girl’s heart) is hard-boiled postal inspector Al Goddard. He’s as cynical as they come, and even doubts the integrity of the Umbrella Nun (Phyllis Calvert). In the course of the investigation, he encounters Jan Sterling as a gangster’s moll. She’s not to be missed. 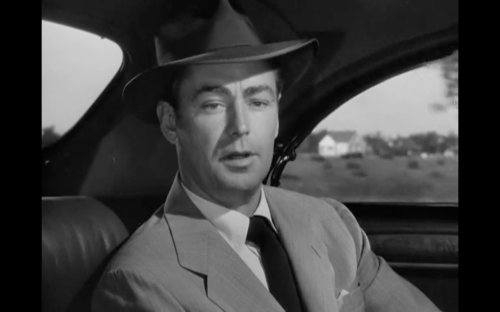 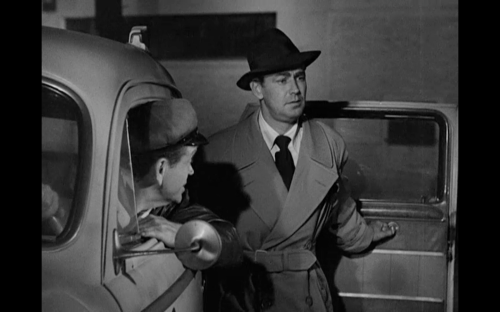 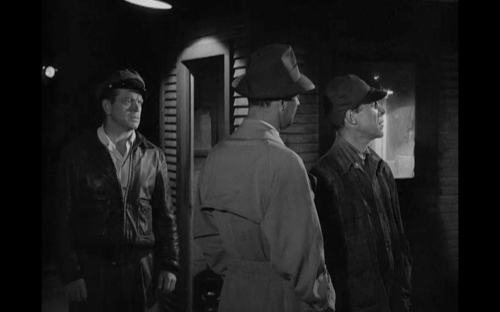 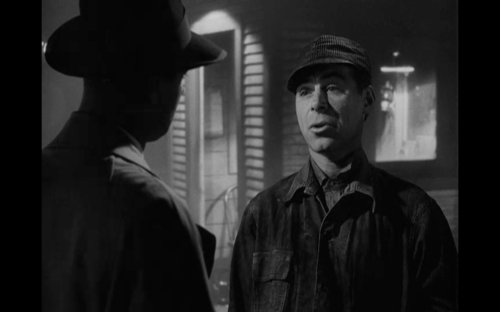 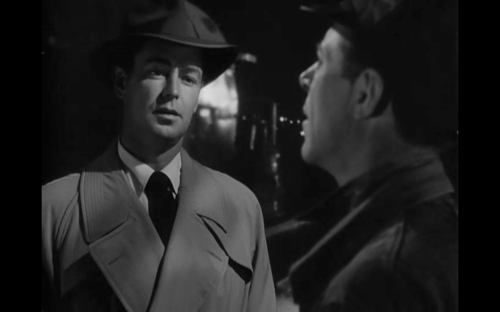 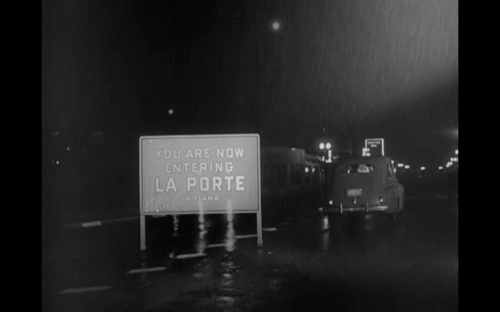 Okay, no more spoilers on the plot, I promise. Aside from the startling cast choices and Alan Ladd appeal, Appointment with Danger holds another element of interest for me. Some of the action takes place in a Midwestern town I once inhabited: 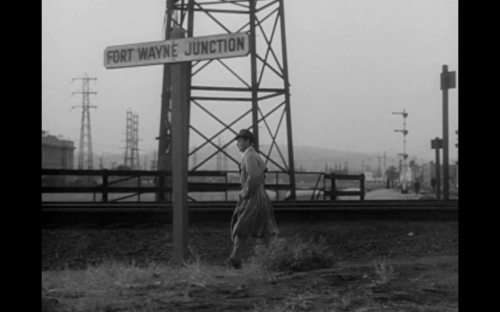 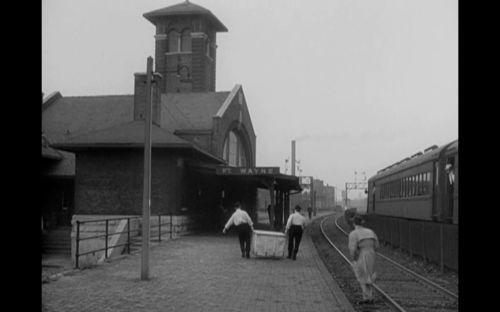 The idea of Alan Ladd calmly leaping off freight trains in a town I once called home is pretty darn thrilling, I must admit. The shot of him above with the Junction sign is not in the Midwest. The mountains in the distance are undoubtedly somewhere closer to the Californian coast. But the shot on the platform, with the distinctive station on the left? That one IS a Midwestern town; the one where I maintained an address for a time. 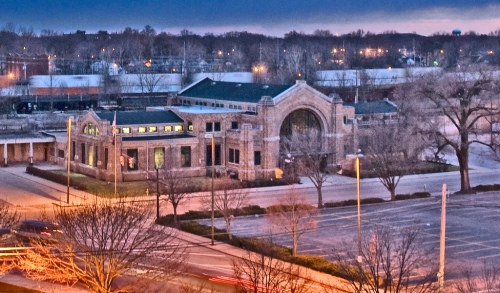 This is the view of the station from the street. Alan Ladd is pictured from the train side of the station, of which photos seem to be impossible to find. But if you look at the roof line of the train side of the building, you see it has the plain peak, as in the screenshot. And the distinctive arched window with decorative contrasting detail at the top is the same, too. The taller structure in the screenshot does not exist today so far as I can tell, but it may have been a building next to the station that has since been torn down. The station is now a reception hall for weddings and events.

How’s that for some Hollywood in my hometown?

Be sure and check out Steve-O’s fabulous review of this film with a more complete plot analysis.

Watch Appointment with Danger for yourself: Netflix, Amazon.

Before I go on and on about what an amazingly brilliant film 2,000 Women (1944) is (and I am going to do that, I promise), let me start by celebrating its availability on DVD.  You really can buy it both in the US and UK!  I’ll provide the links for you at the bottom of this post.  I feel like such a creep when I recommend a film and get everyone all excited about seeing it, only to break the bad news that it’s not on DVD.  Although, I don’t want to stop reviewing films that are not on DVD, since the interest we create in them with our blogs could very possibly push them down the DVD road.  Anyway, on to the review! 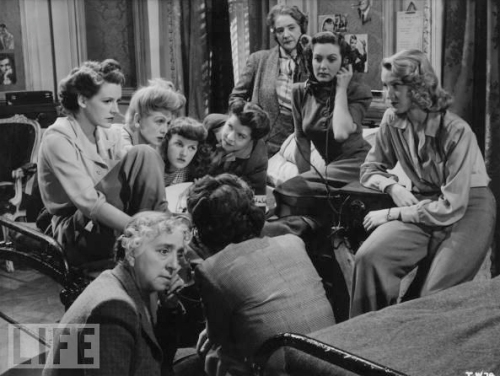 2,000 Women is a British made film starring Phyllis Calvert, Flora Robson and Patricia Roc, to name a few.  It tells the story of 2,000 British women who were interned in a French hotel by the Nazis during World War II.  The film focuses on a small tight knit group of women who are friends because they each have a highly determined personality.  Patricia Roc (sitting on the desk above, with the wireless transmitter to her ear) is the main character: a quiet, soft spoken girl named Rosemary Brown.  Phyllis Calvert (far left, sitting on the bed with a white shirt) is Freda Thompson, a strong, smart sophisticated woman.  Flora Robson (on the floor, listening to the wireless with her back to the camera) is Muriel Manningford, an old style English society woman who takes no guff off the Nazis.  There are many, many more women in the film but it would take ages to list them all and do them justice.

Rosemary and Freda become fast friends in the beginning of the film and end up sharing a room.  The film follows them as they get settled in, learn the ways of the hotel and meet the other inmates.  Amazingly, all the women in the film have incredible hair throughout it, which is a little hard to comprehend, since they had no access to a beauty salon.  The clothes are superb, too.  Lots of slim slacks and collared shirts.  And, in the final scene, all the gals have amazing evening dresses (particularly Phyllis Calvert).

The drama of this film is brought in by a group of RAF fliers who bail out of their plane in the vicinity of the hotel.  The men find their way to the hotel, barging in on several of the women in the middle of the night.  Our lady patriots band together to protect the fliers and try to help them escape.  It’s not an easy task, being that no one knows who to trust and the Nazis lurk around every corner.  There are several surprising plot twists when the ladies find out who their friends really are.  The pilot of the doomed plane, Jimmy Moore, splendidly played by James McKechnie, is the love interest of Patricia Roc’s character Rosemary.  I’m an awful sucker for love stories, and this one is touching, believable and a joy to watch.

You  may be wondering how I managed to see this lovely film.  It played on TCM on September 15, last year in the middle of the night…  Yeah, I just resurrected it.  It sat in my homemade VHS collection for that long.  It’s shameful, I know.

Okay, if you’d like to see this British gem for yourself, you’ve got two options:

The Movies Unlimited version is now on sale for 9 bucks! (House of 1000 Women is the US title)

The Amazon.co.uk version can be bought new or used. I did check Netflix, and can’t find it listed there.  Although, you Netflix gurus may be able to find it.  I hope so!

I came across some terrific links while looking for photos for this post, so I’ll share them with you:

(There’s an Alastair Sim poll on the main page, for all his fans out there.  Kate – this means you. :) )