Why hello there! Betcha thought I’d given up blogging, didn’t you? The lack of posts stems from an odd life dominated by a demanding job. My love of writing and exchanging thoughts with all of you remains intact.

After a month of working with one day off per week to prepare for my absence, I packed up two of my best hats and headed out to the land of glamour to experience four days of movie heaven known as the Turner Classic Film Festival. As you may remember, I attended last year (and only wrote one measly post about the experience then…bad Casey) and the trip fulfilled every expectation I had cooked up. It seemed impossible to improve upon such perfection, but remarkably, 2015 brought an even more enjoyable time than the year before.

This year, my aim focused on trying new films I had not seen before and of the 17 total performances I attended, 12 of them were new-to-me films or documentaries. I attended all three Film Noir screenings (all of which were new viewings for me), every silent film shown and can now brag with pride that I have seen my beloved Douglas Fairbanks, Jr. on the big screen in Gunga Din – an event I almost passed up and would have sincerely regretted missing had it not been for the responsible voice of my dear friend Kate.

And in the middle of all these showings, I met and reconnected with the world of friends I have known online for 7 years now. For those who have never been, TCMFF is akin to the largest family reunion you could imagine. Everyone standing in line alongside you is a long-lost relation – just waiting for the chance to gush about Edna May Oliver’s Hildegarde Withers series or share their experience wearing vintage in everyday life. It feels like coming home.

Having a fabulous vintage clothing chat with @filmradar outside The Egyptian. #TCMFF

However – enough of the sentimentality for now. There will be more later, you can depend upon it! 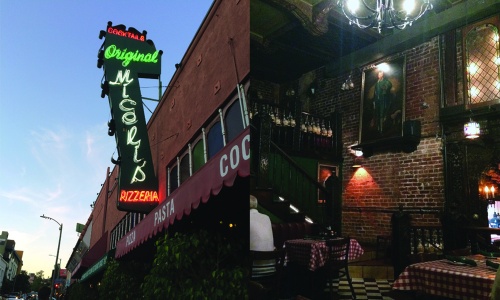 The weekend officially began for me on Wednesday night when Laura and her husband Doug, Kendhal, Raquelle and her husband Carlos and I met for dinner at Miceli’s. As we chatted, the waiters and waitresses took turns singing with incredible skill to the accompaniment of a live pianist. After stuffing ourselves (little did I know it was the only real “meal” I would end up having the whole time), we were on to The Formosa for the annual pre-fest party.

The Formosa was brimming with festival-goers when we arrived. I barely managed to make it in and claim a seat for myself. But, luckily, not before snagging a copy of Holiday in Mexico from the ever-hilarious Matt Patterson of Warner Archive. (Thank you very much, sir!) While there, I was able to catch up with Anne Marie, Trevor, Jessica and Angela and met Theresa, LH and Kendra.

Up next, an actual post about the films! (And yes, there really will be one this time…I promise!)